The Birds, Bees, & Inbound Marketing: Where Our Baby Came From

The month of April reminds us to celebrate our roots as two of our tribe members have anniversaries at Leighton Interactive. You know when your children ask you where babies come from you and stare at them, panic rising on the inside? I asked Dan Soldner, our Managing Director, and Brandon Philbrick, our Creative Director, where Leighton Interactive came from and the story was much easier to hear than that of conception.

But Don't Call Them the Founding Fathers

Leighton Interactive is a Minnesota inbound marketing agency. We are part of the Leighton Enterprises family and we exist because of a unique niche our inception could fill. Dan was selling radio ads for Leighton Broadcasting. Brandon was freelancing after doing art direction at an agency in town. Travis McGinnis, our Director of Marketing Services was designing websites freelance when he wasn’t at the station. When I asked Dan about his story. He said, “it’s such a personal thing.” He told me how he spent a full year trying to formulate the organization his gut was telling him needed to exist. What needed to exist was sales, marketing, leadership, and all of it integrated. Dan said he felt the general agency environment was antiquated as a whole, yet pieces of it had merit. He said agencies and their internal client billing was the real hang-up. Helping clients with their marketing needs and advertising platforms operated like a commodity. Dan wondered where the relationships within that lived and thrived.

So he wrote a business plan to give a place for those relationships to both live and thrive. He presented it to the board of directors. Then he went to work at Leighton Interactive.

Integration as a Verb

Integration by definition is a noun. Incorporation as equals into society or an organization of individuals of different groups. A verb is used to describe an action, state, or occurrence. Hear, become, happen. Leighton Interactive’s integration was a verb. It was an action. After the company was established, Dan and Travis had enough web work to do as it related to Broadcasting’s clients, they recognized the immediate need for a designer. Brandon’s name was brought up. Dan recalls that upon seeing Brandon’s work, he felt an instinct that he needed to be part of Leighton Interactive’s team. Brandon spent his first week on the job attending BrandsFormation with the “high-powered” sales ladies of Leighton Broadcasting. Fish? Where’s your water? Yet he adopted the “if it falls into our laps, we’re lucky enough,” attitude about the scope of work Leighton Interactive had early on. What’s the adage? When you’re hungry, everything tastes like a t-bone?

As the company grew, the initial path it took differed from each guy driving it. Dan was working toward a marketing company. Travis wanted web. Brandon wanted a creative agency with “kick-ass paper and cool shit.” One thing that was apparent was their need to do things differently, and to prove that different worked. How could Leighton Interactive prove their work, worked? How could it be measured? That’s what would be different, what would set us apart from everyone else. It was there, early in that establishment phase, inbound marketing was rearing its little, unknown head. Dan’s an economics major with a huge love of data. He’ll analyze anything. The Lost Boys, as Brandon referred to the trio, were living it and applying inbound marketing without even knowing it.

We integrated sales and marketing. Brandon accompanied Broadcasting’s reps to client meetings as part of the discovery process we still have in place today (except now, Account Managers spearhead that – we’ve had some refinement on roles and scope!). It’s there, in those first meetings that what we do actually happens. We listen. We’re transparent. We helped clients build websites and design logos. Simple, right? Little pieces of inbound marketing. Establishing brands and culture without knowing we were. The whole process helped us establish our brand internally, too. It helped us define Leighton Interactive’s culture and what our brand means to ourselves, and the clients we work with. Dan’s vision of an overall integration was beginning to take shape.

Empowerment: The Tale of One Common Theme

Dan acknowledged Leighton Interactive took hold because Bob Leighton empowered him. Brandon eerily (and separately) echoed that statement saying the early success of the company was due in part to the empowerment Dan bestowed upon him. You have a goal. You have a vision. You have the people – empowering them to achieve those goals and accomplish that vision is exactly what you’re supposed to do. The fact that both Dan and Brandon pointed to empowerment as the foundation this company sits upon is pretty remarkable. Our core values were built out of that. Here, empowerment isn’t a phase, and it’s not just a part of our history. 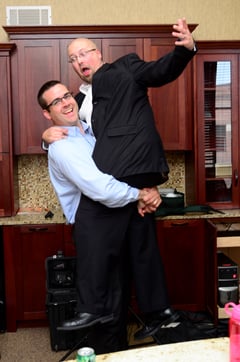 Once Brandon was settled, and Dan and Travis actually moved up to the office space vs. working in Broadcasting’s space, the need for more was evident. Jen Keul came on board, bringing with her hardcore agency experience. As Brandon says, “Jen flipped us on our asses.” She gave what Leighton Interactive was doing a process and a procedure. She made us see the value we had, but weren’t promoting. Leighton Interactive was doing way too much for way too little. Jen gave us structure. We brought on a design intern. An account manager. Someone to handle social media. Admin to open doors each day, literally and figuratively. We gradually built a Tribe, a distinct people dependent on their land for their livelihood, who are largely self-sufficient.

The Only Constant is Change

Why inbound marketing came to be our drug of choice isn’t really all that clear. That’s neither belittling nor arrogant. It’s simply the truth. Perhaps Brandon said it best when he summed it up as, “Slow, gradual change is hard. You don’t really notice when it’s happening.” One day Leighton Interactive realized proving our work works would be our gig. We had embraced inbound marketing before we knew it even had a name. It was a true culture fit and embodied what The Lost Boys envisioned years ago as their vision for this little, big agency rooted. That’s inbound marketing’s inherit principle. Proof. Data. Dashboards. That coupled with our desire to know what our attraction was – another element of inbound marketing – and well, there’s our evolution.

When you look in the mirror, it can be hard to pick out the features you love about yourself amongst what you deem as bad. Adopting inbound marketing highlighted all our best features. It gave us a methodology. Inbound helped us solidify our tagline, “Our work works,” because it dramatizes that. Brandon said as a company, we’re really good at connecting through humility and failures. We don’t know it all, and we know we don’t know it all. “All we can ever do is just get better.”